Bars and night clubs in Ibiza 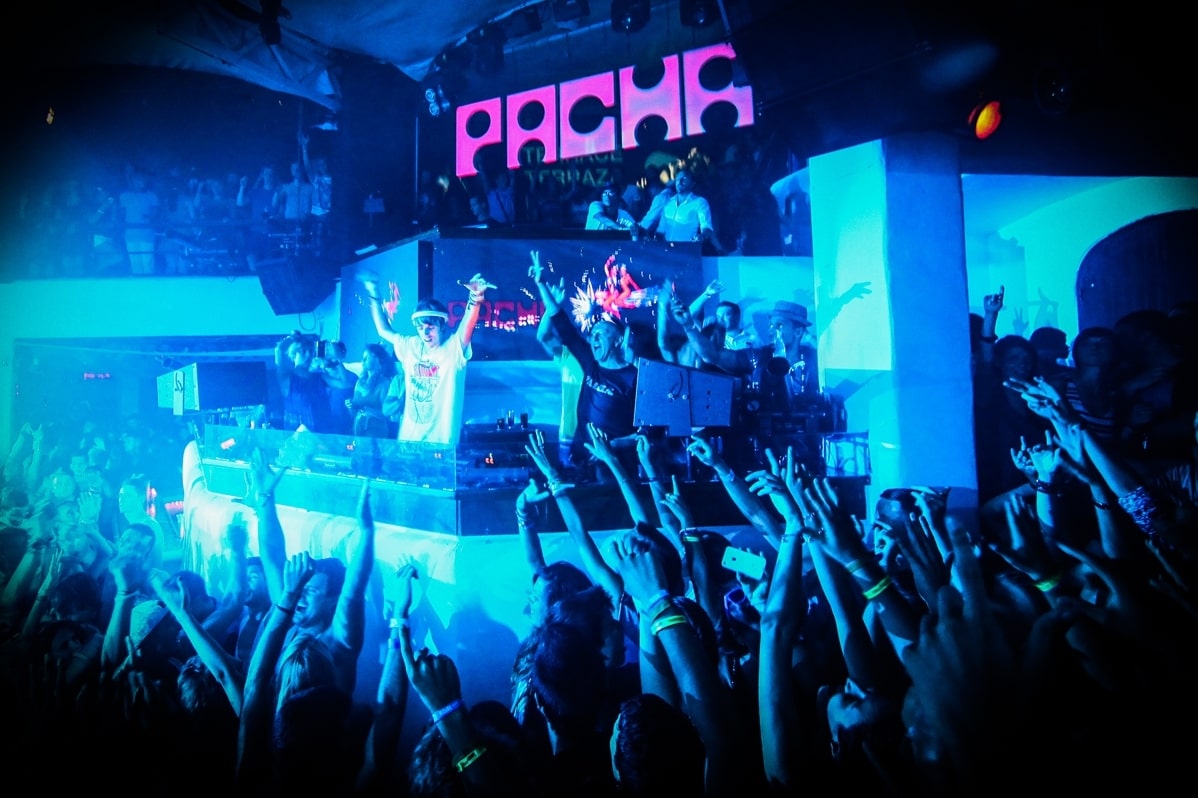 Pacha, created un 1973, is inextricably linked with Ibiza – it’s a club with a reputation that has grown in line with the reputation of the island itself over the years. As a result, it’s a club that’s held dearly in the affections of locals and is considered a ‘must visit’ for tourists making their Ibiza debut.
Famous for: The cherries, VIP tables, playground of the rich and famous, being Ibiza’s oldest, most well-known club
Popular Parties: F*** Me I’m Famous, Flower Power, Solomun + 1.
Prices: Expect to pay from €40 for most parties, except F*** Me I’m Famous, which is more likely to be in the region of €80. Prices increase as the island gets busier and the parties, more popular. A vodka lemon costs approximately €18, and a beer €12. Prices on the door can be up to €20 more expensive than presale, so buy your tickets in advance!. 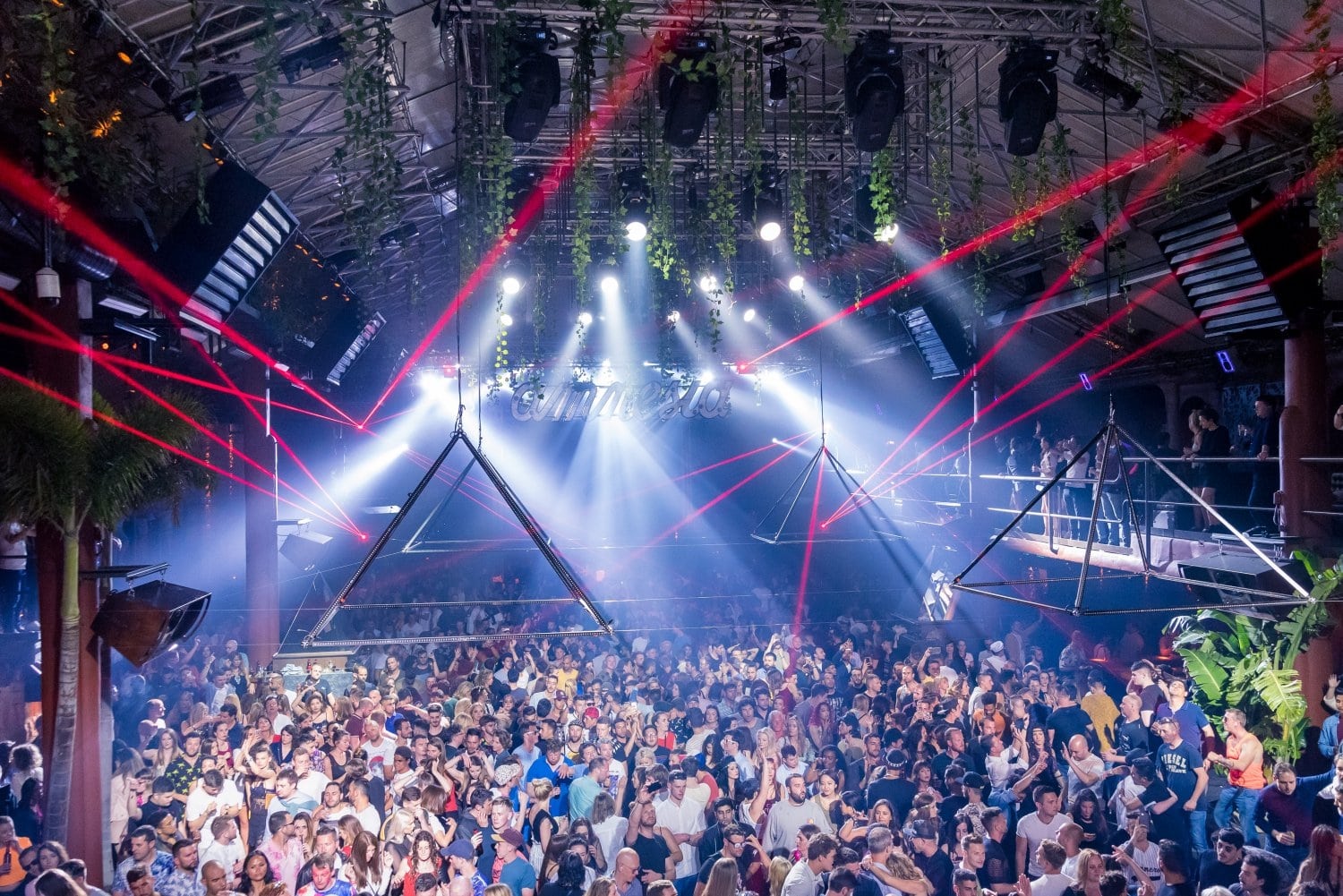 Amnesia has long been the backdrop for some of the island’s most unforgettable clubbing moments. Two massive rooms – the Club Room, a dark, cavernous cauldron, and the Terrace, an expansive arena with a glass roof that is flooded with light when the sun rises – are guarded by the notorious Amnesia ice cannons that could strike at any time.
Very eclectic in its programming, Amnesia covers the best of techno, house, bass, Latin and even some live shows. Like all the super-clubs, Amnesia’s main dance floors can get extremely busy and are famed for incredible communal moments with every hand in the air. The upper levels of Amnesia are VIP, providing an amazing view of the revelry below.
Famous for: Open-air clubbing in the 80s, DJ Alfredo’s eclectic mix of house, disco and pop back in the day, sunrise on the terrace, the most epic opening and closing parties.
Popular Parties: Music On and elrow..
Prices: Expect to pay from €40 to €60 for most parties, depending on the month. Spirit and mixers cost around €15 or more and a beer €13. Water is €9. The bars upstairs are more expensive.
Tip: Visit Cova Santa Restaurant which is part of the Amnesia group for one of the most enjoyable and exclusive dining experiences on the island. Truly excellent food and entertainment that can star genuine Spanish pop stars or ringside seats at the legendary Cocoon and Music On after parties which are sometimes held at the venue. 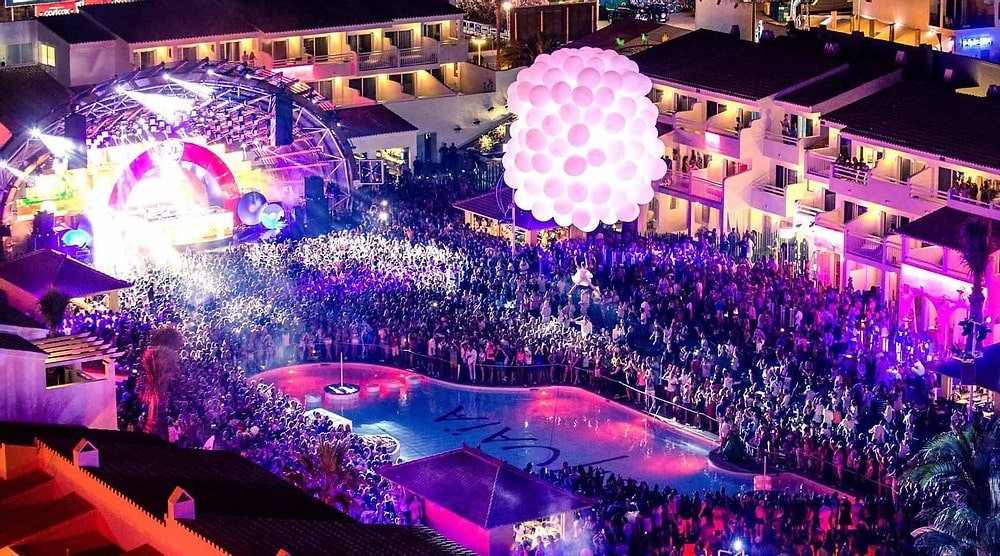 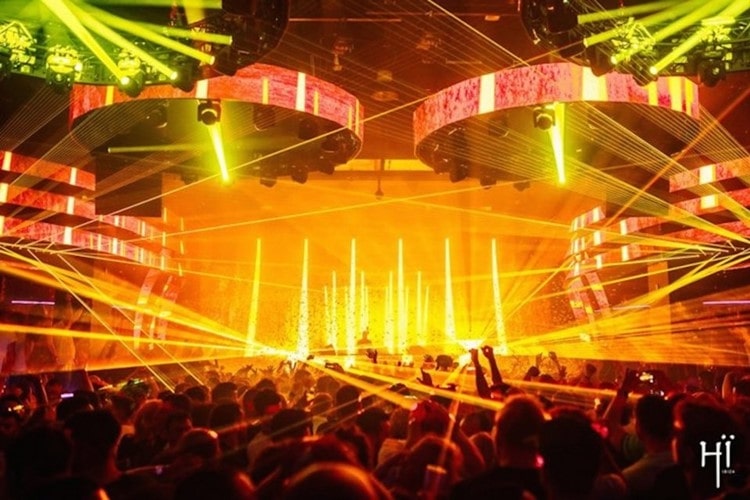 The latest addition to Playa d’en Bossa wonderland sports state-of-the-art superclub Hï Ibiza by Ushuaïa Entertainment. Divided into two main rooms, the Theatre and the Club have impressive light shows and their set-up changes completely every night. The nightclub also has three open-air areas, lots of vegetation, special VIP amenities including private teepee tents and even a DJ booth in the unisex restroom. Besides being one of the slickest nightclubs on Ibiza, it also offers impressive residencies that showcase some of the hottest names in electronic music. The nights at the brand new club explore all sides of the musical spectrum, including EDM, trance, disco, deep house and techno.
Famous for: Being the new incarnation of Space.
Popular parties: Armin van Buuren, Eric Prydz, Glitterbox and Black Coffee.
Prices: Expect to pay between €45 and €50 for parties at Hï Ibiza. Drink prices are the Ibiza norm with a beer costing €13 and cocktails €18+. 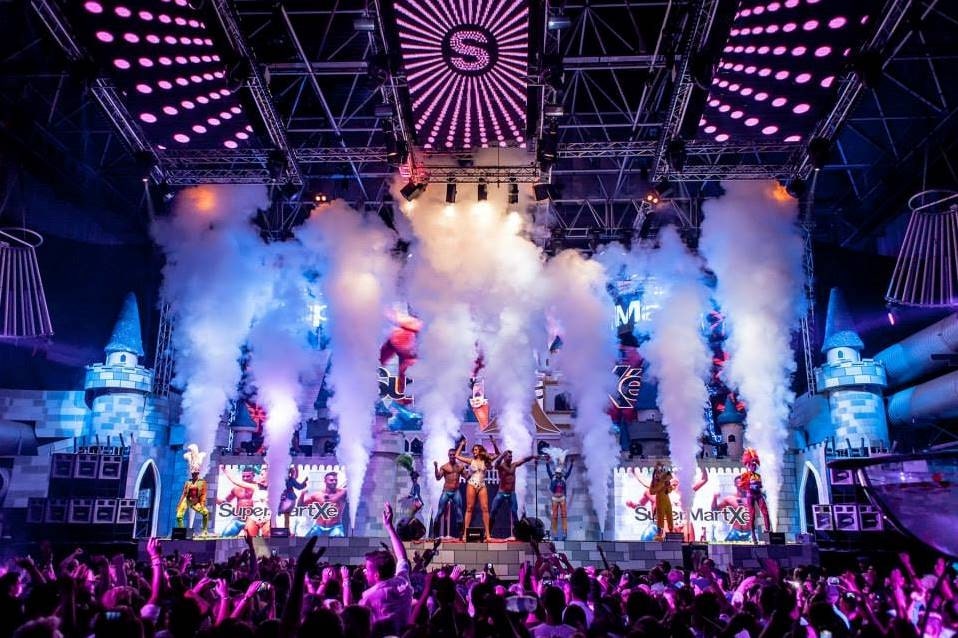 The ‘World’s Biggest Club’ is in Ibiza, but even such an accolade doesn’t prepare you for the scale of what you’re facing with Privilege. With a Main Room like an aircraft hangar – it could fit the whole of most of the other clubs in Ibiza inside it – Privilege has become renowned for providing the spectacular and grandiose, like no other can.
Famous for: Open air clubbing in the ’70/’80s, being the world’s biggest club, Manumission and its sex shows, sunrise in the Vista Club
Popular Parties: RESISTANCE, SupermartXé, IAmARichBitch.
Prices: Entry prices vary between €35 and €50. A vodka limon costs approx. €12 and a beer €10. 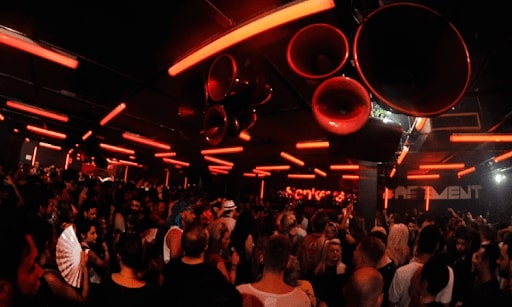 Sankeys opened its Ibiza branch in 2011, quickly making a very strong name for itself as a rave haven for lovers of underground dance music. Sankeys keeps visuals and entertainment to a bare minimum; one goes for the music, so be ready to dance. Located in Playa D’en Bossa, in the street opposite Garbi Hotel, Sankeys is a 1500 capacity club with three rooms, roof terrace, amazing VOID sound system, body sonic dance floor and a great choice of nights for Ibiza.
Famous for: Its basement, underground music, being popular with workers, Warriors bandanas.
Popular parties: Unusual Suspects, The Redlight.
Prices: Sankeys is at the cheaper end of the spectrum when it comes to entrance. Ticket prices can be anything between around €25 and €40. 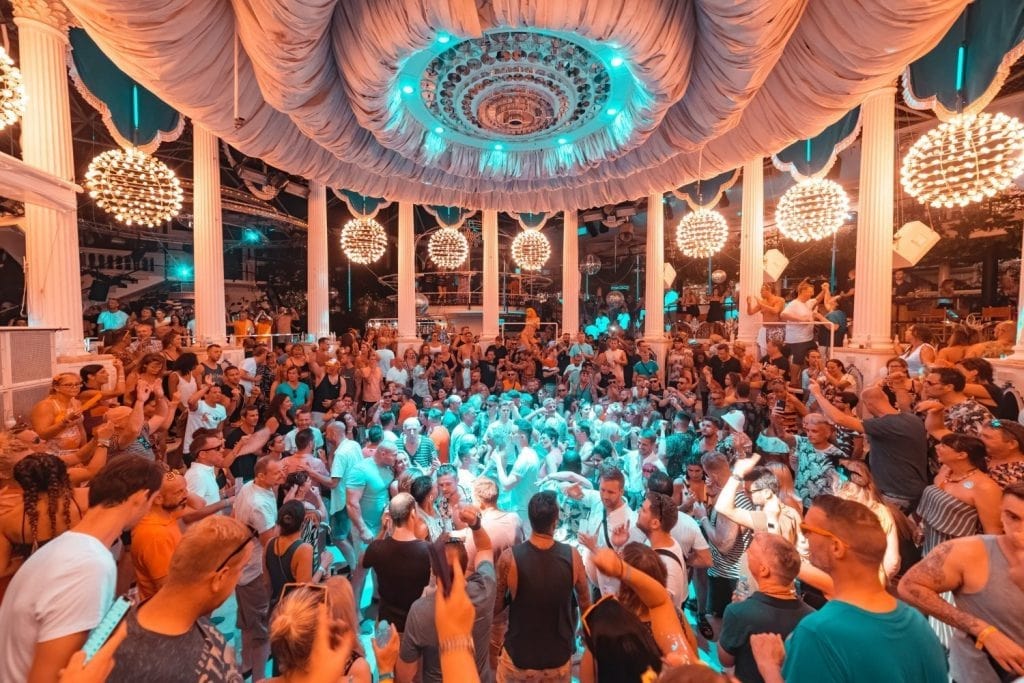 Most beautiful club on the island? Quite possibly, and as the name suggests, it certainly has a paradise feel to it. A labyrinth cum secret garden that oozes glam, Es Paradis has been around since the mid ’70s and is one of the original charms of Ibiza’s nightlife. A rite of passage for most people who visit the island, Es Paradis excels in dazzling Ibiza Virgins, and their infamous water party (Fiesta Del Agua) is the ultimate holiday clubbing experience.
Famous for: Water Parties, spectacular décor and design, pyramid roof, one of Ibiza’s oldest clubs.
Popular Parties: Fiesta Del Agua, Glow Neon Paint Party.
Prices: Expect to pay around 25-40€. A beer should cost around 7€, vodka limon 10€. Reduced price flyers and occasional free entry tickets are available from bars around San Antonio, so keep your eyes peeled. 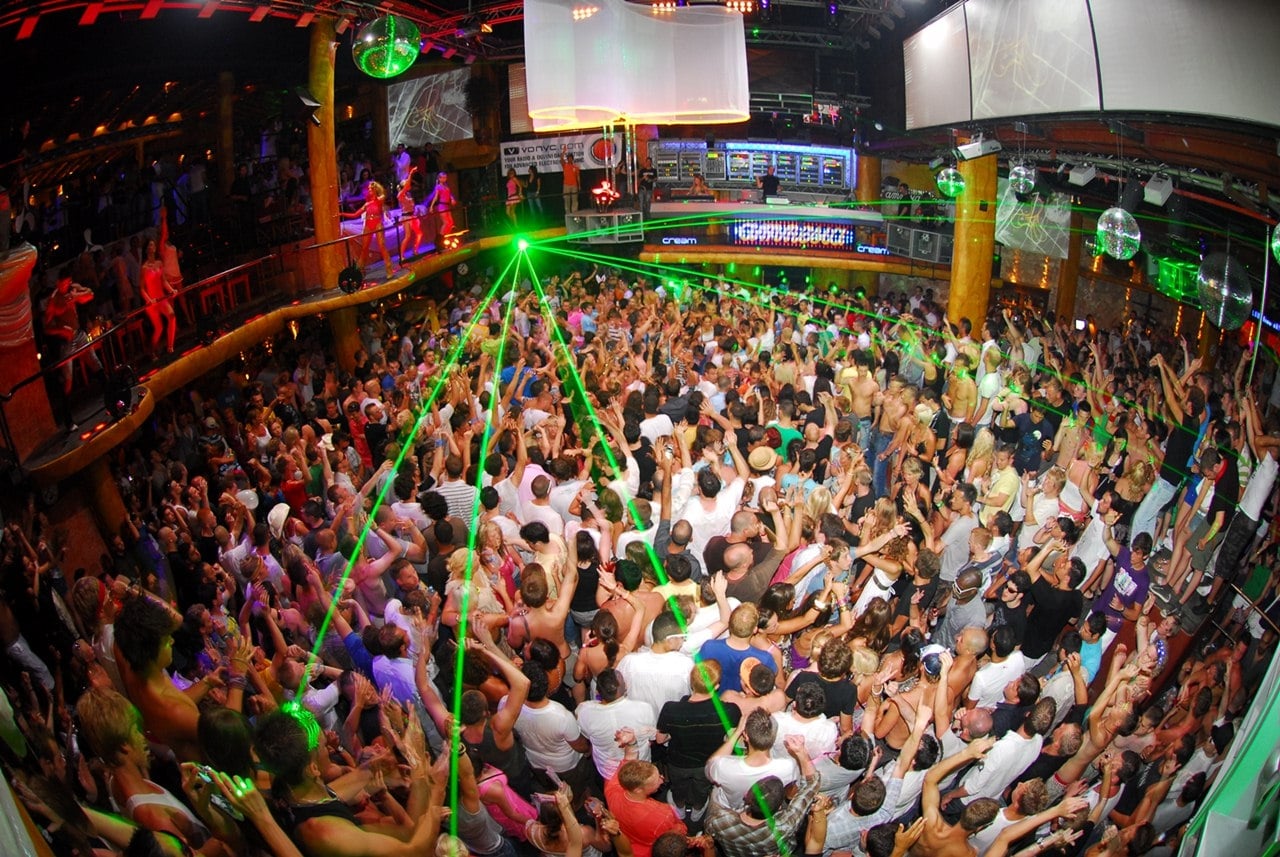 “Eden is San Antonio’s second superclub, and thanks to new owners, a few years ago it received a complete architectural, aesthetic and musical make-over. These days it boasts one of the best sound systems on the island.
After its refurbishment, Eden really made a mark on the San Antonio nightlife scene, with the aforementioned sound system working especially well for more underground nights. Eden is the only place in San Antonio to enjoy quality underground house and tech on a superclub scale.
Famous for: Its impressive VOID sound system.
Popular Parties: Defected In The House.
Prices: It tends to be slightly cheaper to head to a superclub in San An. You can expect ticket prices here to be between €25-€40. 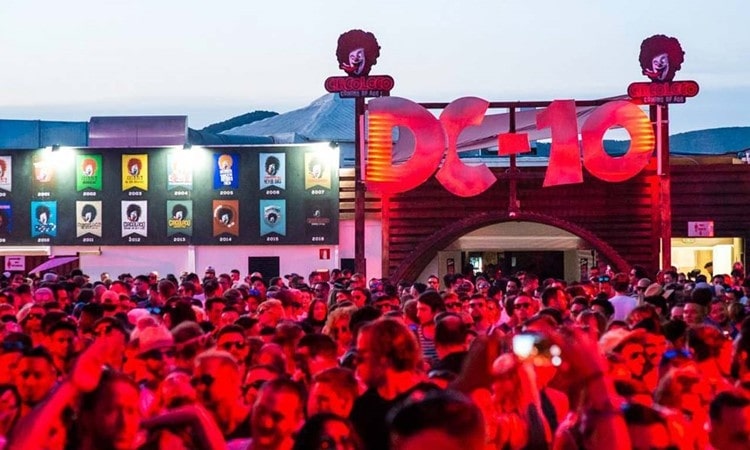 Now famous for being famous, as much as anything else, DC10 has reached its elevated position thanks to offering a unique experience in Ibiza's clubbing environment. When it first opened in 1999, and still typically now, it was a no-holds-barred, hedonistic, dance your socks off fiesta that was totally off the radar.
In contrast to the rest of the clubs, it still does little or no publicity for its parties, meaning those who go are in the know and there for one reason: the music. DC10's longevity and success are ultimately thanks to its devotion to providing solid, quality underground electronic music. You have not had a true Ibiza experience until you have danced away the afternoon in the venue's famous garden.
Famous for: Being the island's only true underground club, legendary opening and closing parties, launching the careers of some of the island's biggest DJs, general silly fun and games, being located at the end of a runway.
Popular Parties: Circoloco, Paradise
How to get there: About €10 in a taxi from Ibiza Town or Playa D'en Bossa, €30 from San Antonio. The bus to Salinas beach stops just past the club. It is also possible to walk from San Jordi (about 15-20 minutes).
Prices: DC10 is cheap (relatively speaking). Expect to pay around €50 for Circoloco and Paradise. Other parties could be cheaper. A beer or water will cost you €5-10 and a mixer around €15. 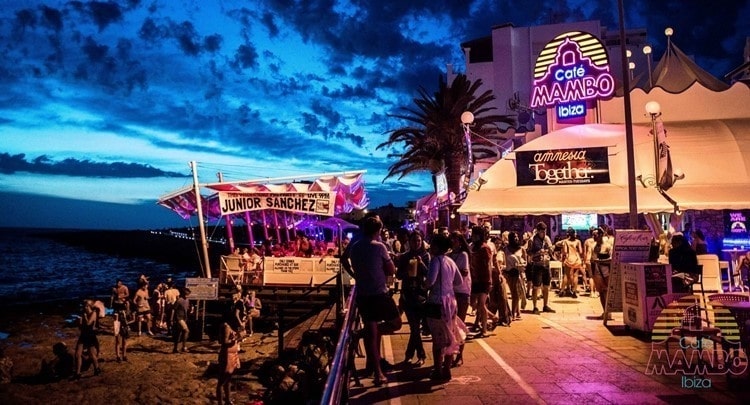 Café Mambo is one of the most iconic restaurants and bars on San Antonio’s famous sunset strip. Providing the sunset strip with a venue that not only serves up delicious food to the backdrop of one of the worlds most mesmerising sunset spots but also a place for tourists and locals to enjoy music from globally renowned DJs. Throughout the week the DJ booth – which is intimately tucked away behind tables that overlook the main promenade, is taken over by Pacha’s finest for their pre-parties. An average week may see the likes of Solomun, Guy Gerber, Martin Solveig and Bob Sinclar take to the decks; and of course with this comes an unrivalled atmosphere which paired with the scenery takes you on a journey to paradise. 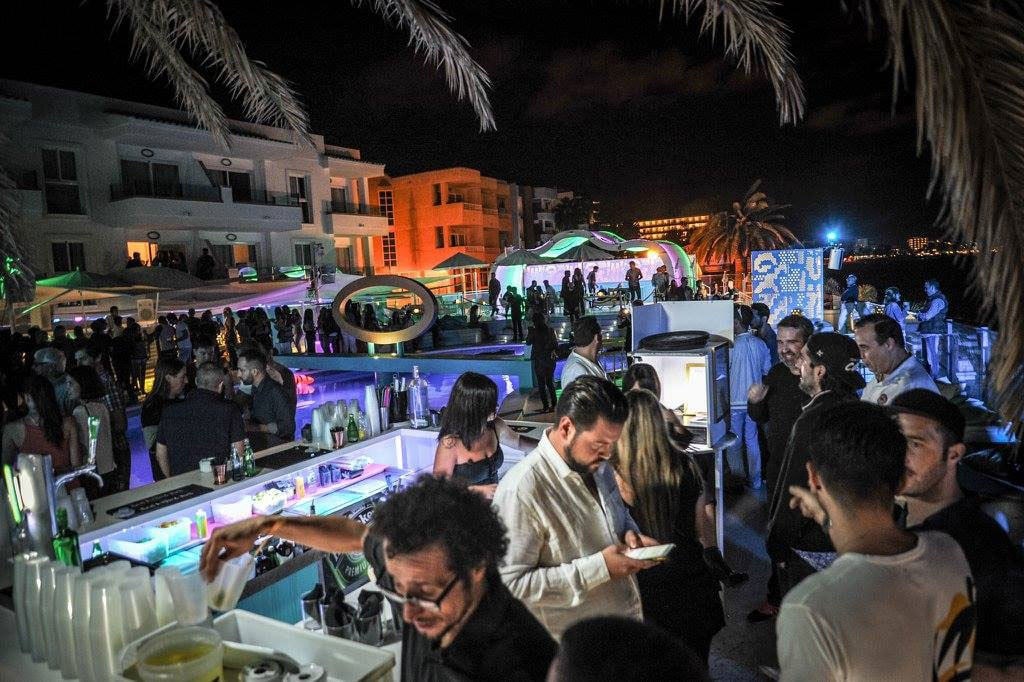 You’ll find the Santos Ibiza Coast Club at the quieter end of the Playa d’en Bossa strip, overlooking the Med in all its glistening glory. It’s actually a hotel that boasts contemporary designed apartments, but it also has a pool to die for, serviced by a bar that delivers delicious cocktails to your day bed. By day, the venue is a sun worshipper’s palace, bedecked in an aqua colour palate that complements the beauty of the Balearic midday sun. By night, it comes alive, with a range of resident DJs and parties, which occasionally take you on an unexpected journey – the opening and closing parties are renowned for this. 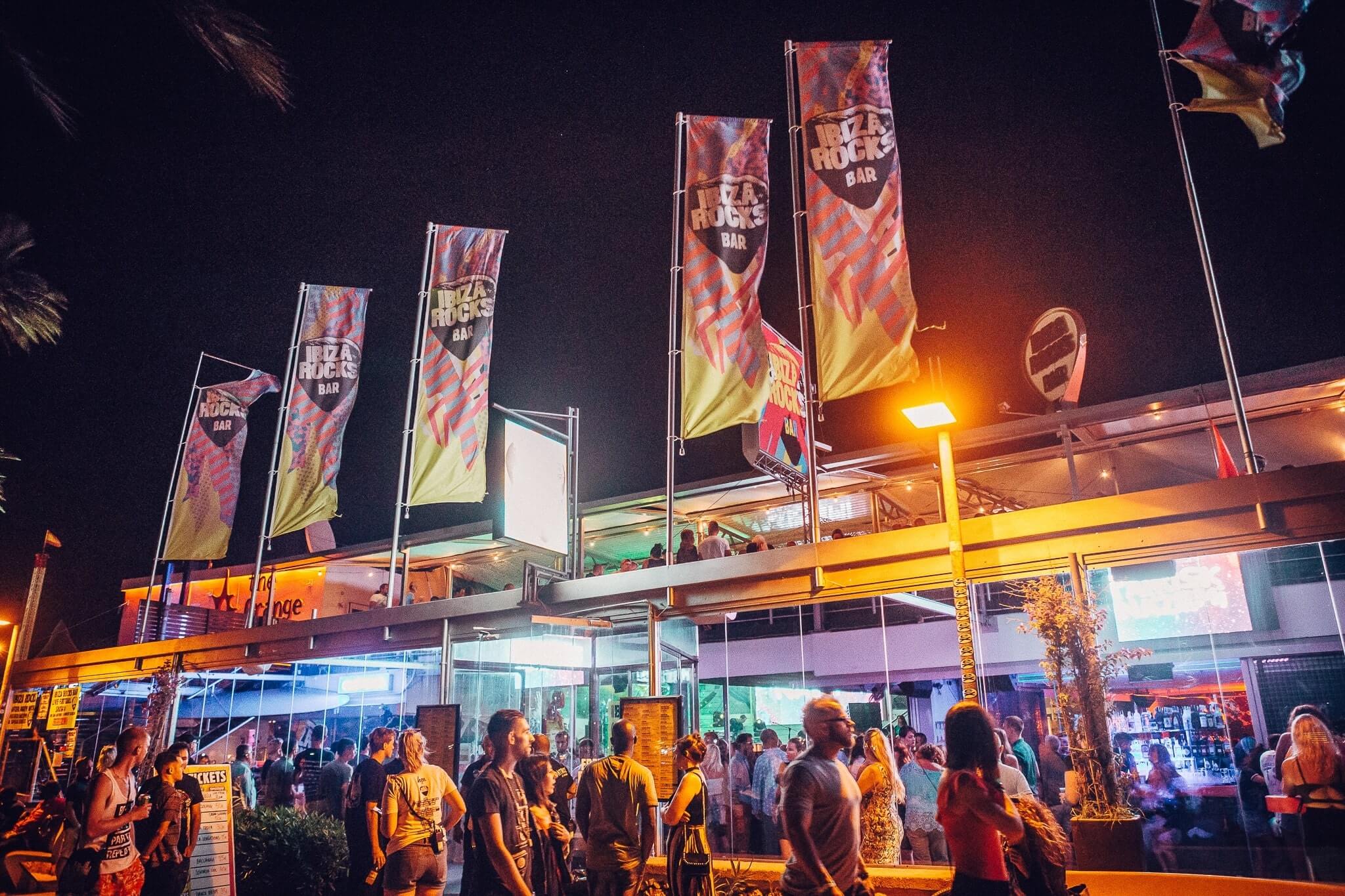 Ibiza Rocks Bar in San Antonio became one of the favoured food and drink spots on the S’Arenal beach strip. On the promenade right opposite the beach, it’s a great spot for people watching, or staring aimlessly out at the water while you sip a beer or cocktail and plan your next move. In deference to the Ibiza Rocks mothership, Ibiza Rocks Hotel, the bar usually plays a contemporary soundtrack that features bands and live artists – a nice alternative to the dance music pouring out of almost every other venue in the area. 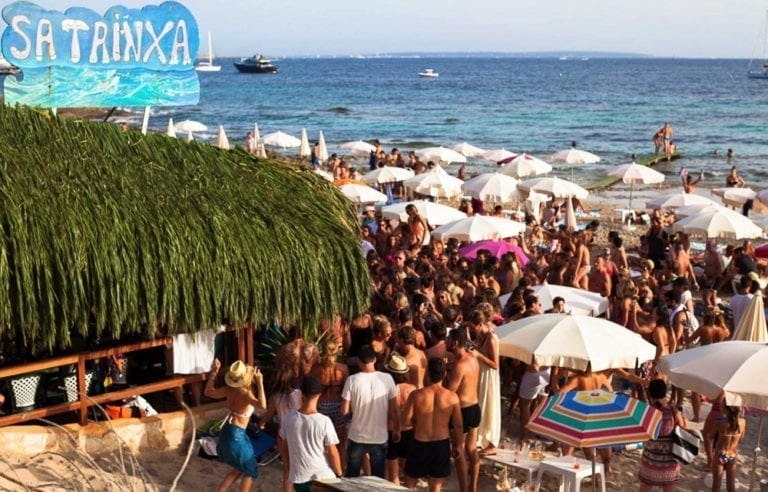 We may say this a lot but, thanks to its location, décor, history and attitude, Sa Trinxa really does typify the Ibiza island vibe. Set on the sand at the far end of Salinas beach (past the nudey strip), Sa Trinxa has become its own little microcosm – the most festive and social corner of the beach, its atmosphere built around the restaurant and bar that’s brought energy to the area since 1978. The coastal views are sweeping and bright, while the bar’s décor is beachy, colourful and relaxed – this does not feel like another modern, minimalist venue. The food is fresh and varied, with drinks always flowing and the appealing option to have your order brought to you on a tray on the beach – true holiday style.