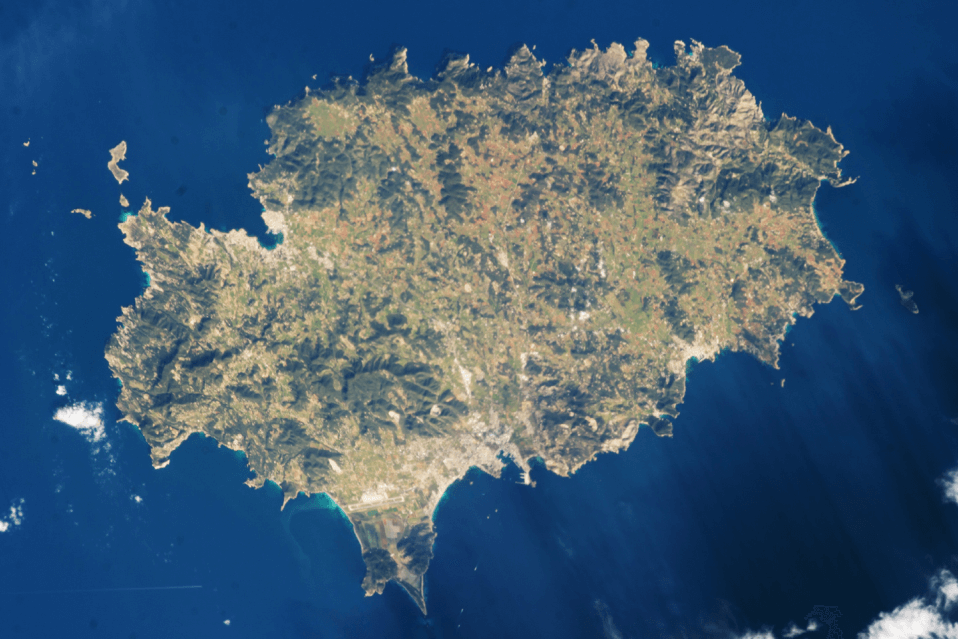 Ibiza is a Spanish island in the Mediterranean Sea off the eastern coast of Spain. It is 150 kilometres from the city of Valencia. It is the third largest of the Balearic Islands, an autonomous community of Spain. Its largest settlements are Ibiza Town, Santa Eulària des Riu, and Sant Antoni de Portmany. Its highest point, called Sa Talaiassa, is 475 metres above sea level. Ibiza has become well known for its association with nightlife, electronic dance music, and for the summer club scene, all of which attract large numbers of tourists drawn to that type of holiday. Several years before 2010, the island's government and the Spanish Tourist Office had been working to promote more family-oriented tourism, with the police closing down clubs that played music at late night hours, but by 2010 this policy was reversed. Around 2015 it was resumed. Ibiza is a UNESCO World Heritage Site. Ibiza and the nearby island of Formentera to its south are called the Pine Islands, or "Pityuses".

Ibiza is considered to be a popular tourist destination, especially due to its well-known and at times riotous nightclub-based nightlife centred on two areas: Ibiza Town, the island's capital on the southern shore and Sant Antoni to the West.

Night life in Ibiza has undergone several changes since the island's opening to international tourism in the late 1950s. Origins of today's club culture may be traced back to the hippie gatherings held during the 1960s and 1970s. During these, people of various nationalities sharing the hippie ethos would regroup, talk, play music and occasionally take drugs. These would most often happen on beaches during the day, with nude bathing a common sight, and in rented fincas in the evenings or at nights. Apart from this confidential scene, which nevertheless attracted many foreigners to the island, local venues during the 1960s consisted mostly of bars, which would be the meeting points for Ibicencos, ex-pats, seafarers and tourists alike. The Estrella bar on the port and La Tierra in the old city of Eivissa were favourites.[30]

During the 1970s, a decade that saw the emergence of the contemporary nightclub, several places opened and made a lasting impact on Ibiza's nightlife. Four of these original clubs are still in operation today: Pacha, Privilege (formerly Ku), Amnesia and Es Paradís. These four clubs mainly defined nightlife on the White Island, which has evolved and developed from several distinctive elements: open-air parties (Es Paradis, Privilege, Amnesia), held in isolated places, eventually old fincas (Pacha, Amnesia), that mixed in nudity and costume party (Es Paradis, Privilege, Pacha) and enabled people from various backgrounds to blend (all). The hippie ethos served as a common factor that infused all these venues and catalyzed the experience of a certain kind of freedom, accentuated by the holiday nature of most of the stays on the White Island.

During the 1980s, the music played in these clubs gained in reputation and became known as Balearic beat, a precursor of the British acid house scene. As rave parties blossomed all over Europe, a DJ-driven club culture took hold of Ibizenca nightlife. It was at that time that Space opened, thanks to Pepe Rosello, which found a niche in the after-hour parties. The club would close at 6 AM and open again at 7 AM, when all the other clubs were still closed, enabling party-goers to flock from the other clubs to Space and continue dancing in broad daylight.

When you contact our agency, you can have an unforgettable VIP rest at the Ibiza. We will help you with such tasks as paperwork, booking the housing and car, organization of free time and excursions. You should just relax and enjoy the sea, sun and nice weather of the best resort in Europe round a clock.

Ibiza - Overview of the island

If you decided to rest at the Ibiza first time, you should be interested in the history of the modern island of Ibiza:

Popular resorts at the Ibiza

The basic resorts are:

Review of the attractions of the Ibiza

When you plan the rest at the Ibiza you should decide which restaurants, clubs, and beaches of Ibiza you want to visit, because they are so much. The most popular restaurants are: